We support “Innovation for Growth” of Tohoku companies using the support know-how we have accumulated since 1995.

Tokeiren Business Center aims to contribute to the growth and rebuilding after the Great East Japan Earthquake of companies in the six Tohoku and Niigata Prefectures.

Thank you very much for your continued support and encouragement.

Since our establishment in 2011, we have been working to support the growth of companies in the six Tohoku and Niigata Prefectures, and completed the second phase of activities at the end of March 2021.

During the five years of the second phase, we believe that we have been able to achieve a certain level of success by working together with more than 100 experts to build an industrial structure that increases the added value of six Tohoku and Niigata Prefectures through co-creation among industry-academia-government-bank collaboration.

On the other hand, the economic situation in the six Tohoku and Niigata Prefectures is becoming increasingly severe with the rapid decline in population, declining birthrate and aging population, and the spread of the novel coronavirus that has put a damper on the recovery from the Great East Japan Earthquake.

Against this backdrop, the need to continue and further strengthen the support activities of the Center was expressed, and at the 11th meeting of the Board of Directors (held on March 26, 2021), it was decided to extend the period of activities for a further five years and start the third phase of activities.

in the third phase, we will support the independence and growth of local industries in the six Tohoku and Niigata Prefectures by setting three strategic goals: [1]”Strengthen the formation of internationally competitive regional innovation centers”, [2]”Promote growth through co-creation and digitalization of industry-academia-government-bank collaboration” and [3]”Creation of new industries that will lead to future generations through the promotion of the world’s most advanced research and development projects (synchrotron radiation, ILC, etc.).”

We believe that it is our mission to contribute to the strengthening of industrial competitiveness, the improvement of productivity, and the creation of new industries in the six Tohoku and Niigata Prefectures in the post-Corona era through our new five-year activities.

We thank you for your continued support and encouragement. 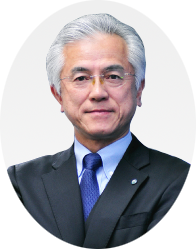